The findings of gendered attitudes to e-book reading

byForrja -July 02, 2020 0
The findings of gendered attitudes to e-book reading 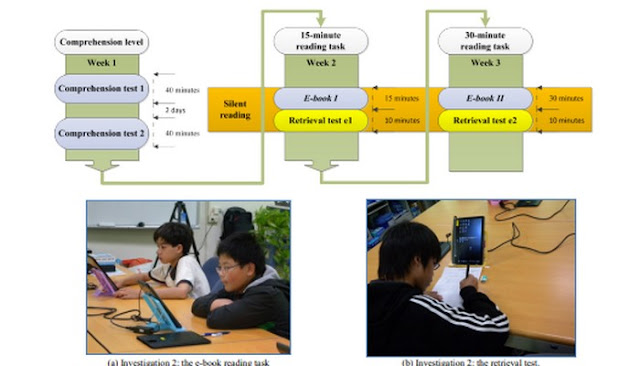 Introduction
The findings of gendered attitudes to e-book reading In general, all of the children made very positive comments about the reading of e-books, as shown in Table 3, somewhat different to the findings in Lam et al. (2009), which examined the opinions of older readers.
This is not surprising, as the boys and girls in this study are all digital natives, and thus have higher levels of technology acceptance than older individuals (Holzinger, Searle, & Wernbacher, 2011). Although Meelissen and Drent (2008) suggested that the gender differences in attitudes toward using computer at school are small or even negligible, there was a significant difference in the
1- Satisfaction dimension for all children.
The results indicated that the girls (m = 4.48) were more satisfied with reading an e-book than the boys (m = 4.20). Moreover, in the other dimensions the girls also had slightly positive attitudes than the boys, although overall these gender differences were not significant.
The application of personalized reading technologies, such as e-books with IELS, as used in this work, can better support individualized reading, and thus is likely to reduce the gender inequalities related to the use of the technology in the classroom (Smith et al., 2007).
In support of this, both genders represented positive attitudes towards the reading of e-books, rarely negative, as seen in gender related studies (e.g. Lam et al., 2009; Meelissen & Drent, 2008)
Note.
*p < .05. “m” represents the mean value of the children’s scores in the related dimension, and-  “s.d.” means the standard deviation of the children’s scores in the related dimension. “t” means the independent sample t-test value, and the bold values mean that the scores between the male and female children were significantly different.
In the open-ended questions, the children’s feedback was still positive and similar to the findings shown in Table 4. However, by examining their answers to the question as to whether any improvements are needed to IELS, 27.72% of the children hoped it could have more functions, such as games, drawing and annotation tools. As shown in Table 4, the boys were more likely to feel that the functions of the IELS fell short of their expectations, especially with regard to games.
2- Note. “N” represents the number
Of children suggesting the related item, and “%” means the children’s percentage of all gendered participants (males = 85 and females = 81). These results echo the observation of Kay and Lauricella (2011) that male students played significantly more games during laptop-based learning, whereas the female students carried out significantly more note-taking, while Sim,
MacFarlane, and Read (2006) also found that males engaged in more behaviors unrelated to learning in a similar context. Therefore, there were significant gender differences in the functions requested for the e-book platform. Such usability-oriented requests raised among the children are substantially existed towards the e-book reading.
3- "The results thus show that usability does matter
To children, although the genders have different ideas about how to improve it, and this issue deserves further investigation. Investigation two: Identifying gender differences in reading behaviors and outcomes The research procedure As shown in Figure 3, the research procedure was designed to investigate whether there were any differences in the reading behaviors and outcomes between genders.
4- Figure 3. The research procedure
Of the investigation two for identifying the gender differences in reading behaviors and outcomes Since silent reading is widely adopted in general classroom practice, it was thus considered the ordinary reading condition in this study. In the silent reading activity, the children were able to read at their own optimal rates, and this is in line with what Fraser (2007) noted about the
Rauding status, which is an individual’s preferred reading rate, at which they can effectively assimilate the ideas across sentences at a pace that follows their own cognitive speed. Moreover, this study adopted two different reading durations (15 and 30 minutes) that conventionally occur in the classes held at
5-Taiwanese elementary schools (40 minutes).
The participants and reading materials This study recruited 23 sixth-grade children (12 males and 11 females) with the consent of their parents to participate the reading experiment. Before the reading experiment, the children were asked to finish two comprehension tests to ensure that the genders were at similar reading comprehension levels that would not cause significant differences in their reading rates (Joshi & Aaron, 2000). As shown in
Figure 4a, every participant was asked to silently read two ebooks (one e-book per week) with an e-reader (FIC Tycoon TVB00). Meanwhile, an observer was arranged to unobtrusively sit in as a teacher and assist students if needed. (a) Investigation 2: the e-book reading task (b) Investigation 2: the retrieval test. Figure 4.
6- Investigation two conducted in this study
Two different reading durations (15 and 30 minutes) were used to examine the gendered reading behaviors and outcomes. Two e-books adopted in this study were general science information texts written in Chinese. E-book I (reading time = 15 minutes) consisted of 20 topics, a total of 3,640 words, the average words per sentence was 15 words, and the .
Conclusion
Word frequency was 99.09% within the 5,021 common Chinese words that were selected from the elementary school survey of common words report (Ministry of Education, 2000). E-book II (reading time = 30 minutes) consisted of 24 topics, a total of 5,475 words, the average words per sentence were 14 words, and the word frequency was 99.20% within the above-mentioned set. The use of above level texts was to ensure that the two books
Mathematics