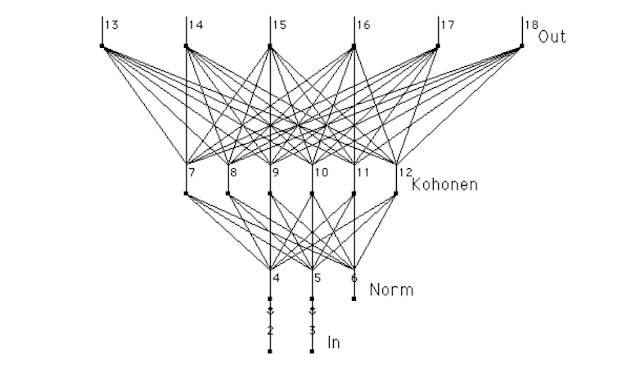 Most developers use a uni-flow variant of this formal representation of counter-propagation. In other words. there is only one feedforward path from input layer to output layer. An example network is shown in Figure 5.2.2. The uni-directional counter-propagation network has three layers. If the inputs are not already normalized before they enter the network., a fourth layer is sometimes added.

The main layers include an input buffer layer, a self-organizing Kohonen layer, and an output layer which uses the Delta Rule to modify its incoming connection weights. Sometimes this layer is called a Grossberg Outstar layer.

1-The size of the input layer depends upon how many

This can be done with a preprocessor, before the data is entered into the counter-propagation network. Or, a normalization layer can be added between the input and Kohonen layers. The normalization layer requires one processing element for each input, plus one more for a balancing element. This layer modifies the input set before going to the Kohonen layer to guarantee that all input sets combine to the same total.

2- Normalization of the inputs is necessary to insure that the

Kohonen layer finds the correct class for the problem. Without normalization, larger input vectors bias many of the Kohonen processing elements such that weaker value input sets cannot be properly classified. Because of the competitive nature of the

This layer acts as a nearest neighbor classifier in that the processing elements in the competitive layer autonomously adjust their connection weights to divide up the input vector space in approximate correspondence to the frequency with which the inputs occur.

3- There needs to be at least as many processing

Since the Kohonen layer includes competition, only a single output is produced for a given input vector. This layer provides a way of decoding that input to a meaningful output class. It uses the Delta Rule to back-propagate the error between the desired output class and the actual output generated with the training set.

4- The errors only adjust the connection weights coming

5- Element will evolve weights in response to those

competitive processing elements and zero for all others. There is a problem which could arise with this architecture. The competitive Kohonen layer learns without any supervision. It does not know what class it is responding to. This means that it is possible for a processing element in the

This network provides a general solution to pattern classification problems by following an approach developed in statistics, called Bayesian classifiers. Bayes theory, developed in the 1950's, takes into account the relative likelihood of events and uses a priori information to improve prediction.

Estimators which were developed to construct the probability density functions required by Bayes theory. The probabilistic neural network uses a supervised training set to develop distribution functions within a pattern layer. These functions, in the recall mode, are used to estimate the likelihood of an input feature vector being part of a learned category, or class.

The learned patterns can also be combined, or weighted, with the a priori probability, also called the relative frequency, of each category to determine the most likely class for a given input vector. If the relative frequency of the categories is unknown, then all categories can be assumed to be equally likely and the determination of category is solely based on the closeness of the input feature vector to the distribution function of a class.

8- An example of a probabilistic neural network

is shown in Figure 5.2.3. This network has three layers. The network contains an input layer which has as many elements as there are separable parameters needed to describe the objects to be classified. It has a pattern layer, which organizes the training set such that each input vector is represented by an individual processing element.

, The network contains an output layer, called the summation layer, which has as many processing elements as there are classes to be recognized. Each element in this layer combines via processing elements within the pattern layer which relate to the same class and prepares

that category for output. Sometimes a fourth layer is added to normalize the input vector, if the inputs are not already normalized before they enter the network. As with the counter-propagation network, the input vector must be normalized to provided proper object separation in the pattern layer.