Here's how to describe the teaching system

Here's how to describe the teaching system 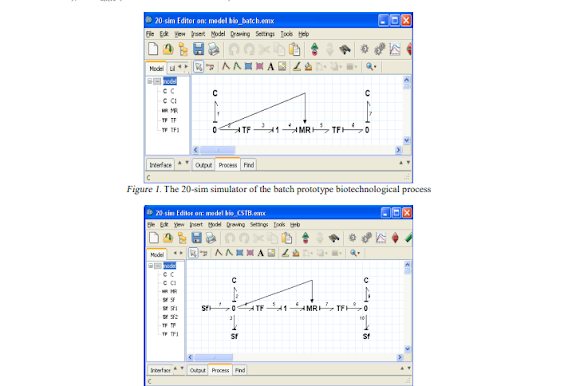 The exercises allow the students to modify the kinetic parameters, choose the desired type of bioreactor, plot time evolution of some biological variables (biomass, substrates, products), and compare the obtained results.

In order to help the students, the experiments comprise a short tutorial (in electronic form), which must be read on the beginning of an experiment, and a small quiz, useful for checking the students’ knowledge after the experiment.

First, a set of experiments with 20-sim software package is designed; the final task is to obtain bond graph prototype simulators, which can be combined in order to obtain simulators for complex bioprocesses: ˙

Experiment no. 1: Basics of 20-sim modeling and simulation environment -

Experiment no. 2: Bond graph elements in 20-sim—implementation and connectivity -

Second, a set of modeling exercises is designed via bond graph, which comprises procedures for the achievement of mathematical models: ˙

Exercise no. 1: Mass balances and accumulation of species in bond graph terms -

Exercise no. 2: Constitutive equations and modeling of reaction rates -

Exercise no. 4: Mathematical model of the prototype continuous bioprocess obtained via bond graph -

Twenty-sim is an advanced modeling and simulation program (Controllab Products B.V., Netherlands) that runs under Microsoft Windows. Using 20-sim, the behavior of systems, such as electric, mechanical, hydraulic, and chemical systems or any combination of these systems can be simulated.

Twenty-sim fully supports graphical modeling, allowing the design of dynamic systems in an intuitive and user-friendly way. The 20-sim software package can be used by the students for the simulation of bioprocesses modeled by bond graphs.

These simulators are organized in libraries that exploit the modularity of the method, which is very useful for the students, who will be able finally to understand and to simulate complex bioprocesses. Next, the core issues of experiments 3, 4 and 5 will be shortly presented.

2- Prototype simulators for batch and

continuous bioprocesses After they read short tutorials, the students start each experiment that consists in the implementation in 20-sim of bond graph elements (Sf, C, TF, etc.) by using libraries, tools and interactive menus.

The prototype bond graph simulators are obtaining starting from the scheme (1) and by taking into consideration the bioprocess type. In the case of the batch bioreactor (experiment no. 3), there is no influent into or effluent stream from bioreactor, and the biomass

3- X is periodically collected. For the development

of bond graph model of this bioprocess, the reaction scheme (1), and the mass transfer through the bioreactor are taken into account. The prototype is obtained and placed into a special implementation window of 20-sim environment (see Fig. 1). The directions of half arrows correspond

4- To the run of reaction, going out from the substrate

TF elements were used (Roman & Selişteanu, 2012). A difficult task is the modeling of reaction kinetics. The form of kinetics is complex, nonlinear and, in many cases, unknown. A general assumption is that a reaction can take place only if all reactants are presented in the bioreactor.

Therefore, the reaction rates are necessarily zero whenever the concentration of one of the reactants is zero. In order to model the rate of reaction φ, a modulated two-port R element, denoted MR4,5, was used.

For the case of continuous bioprocess (experiment no. 4), the substrate is fed to CSTB continuously, and an effluent stream is continuously withdrawn such that the culture volume is constant. From the reaction scheme (1) and taking into account the mass transfer, using the bond graph modeling procedure, the pseudo bond graph model is achieved and is given in Figure 2.

ponents are represented by two 0-junctions: 01,2,3,4 (mass balance for S), and 08,9,10 (mass balance for biomass X). Figure 1. The 20-sim simulator of the batch prototype biotechnological process Figure 2. The 20-sim simulator of the continuous prototype biotechnological process A modulated two-port resistive element MR6,7 was used to model the kinetics. Mass flow of the component entering the reaction is modeled using a source flow element Sf1.

5- The output flows of the reaction components

6- After the implementation of bond graphs,

The students can use all the facilities of 20-sim environment to add or to remove elements, to run simulations, to modify various parameters, to obtain and to analyze the evolution of biological variables (also, the dynamical state-space models can be obtained according to the procedures described in next subsections).

A simulator for two interconnected bioprocesses In order to exploit the modularity of bond graph approach, embedded in the 20-sim package, the students can realize more complex simulators by using the prototypes. Next, an example of such simulator is shortly described (experiment no. 5).

The activated sludge bioprocess is an aerobic process of biological wastewater treatment (Dochain, 2008; Roman & Selişteanu, 2012). In practice, this bioprocess takes place inside CSTBs or in the so-called sequencing batch reactors. Usually, the activated sludge bioprocesses operate in at least two interconnected tanks, as in Figure 3: an aerator in which degradation of pollutants takes place and a sedimentation tank (settler) in which the liquid is clarified.

That is, the biomass is separated from the treated wastewater. Part of the settled biomass is fed back to bioreactor, while the surplus biomass is removed. The reaction may be described by a simple autocatalytic aerobic microbial growth that can be represented by the reaction scheme: