How to teach an artificial neural network

How to teach an artificial neural network 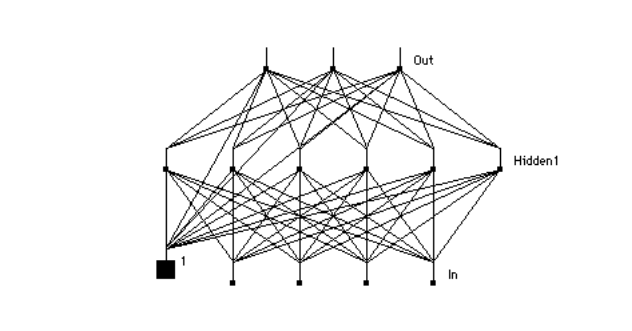 The vast majority of artificial neural network solutions have been trained with supervision. In this mode, the actual output of a neural network is compared to the desired output. Weights, which are usually randomly set to begin with, are then adjusted by the network so that the next iteration, or cycle, will produce a closer match between the desired and the actual output.

The learning method tries to minimize the current errors of all processing elements. This global error reduction is created over time by continuously modifying the input weights until an acceptable network accuracy is reached.

With supervised learning, the artificial neural network must be trained before it becomes useful. Training consists of presenting input and output data to the network. This data is often referred to as the training set. That is, for each input set provided to the system, the corresponding desired output set is provided as well. In most applications, actual data must be used.

This training phase can consume a lot of time. In prototype systems, with inadequate processing power, learning can take weeks. This training is considered complete when the neural network reaches an user defined performance level. This level signifies that the network has achieved the desired statistical accuracy as it produces the required outputs for a given sequence of inputs.

When no further learning is necessary, the weights are typically frozen for the application. Some network types allow continual training, at a much slower rate, while in operation. This helps a network to adapt to gradually changing conditions.

To contain all the needed information if the network is to learn the features and relationships that are important. Not only do the sets have to be large but the training sessions must include a wide variety of data. If the network is trained just one example at a time, all the weights set so meticulously for one fact could be drastically altered in learning the next fact.

The previous facts could be forgotten in learning something new. As a result, the system has to learn everything together, finding the best weight settings for the total set of facts. For example, in teaching a system to recognize pixel patterns for the ten digits, if there were twenty examples of each digit, all the examples of the digit seven should not be presented at the same time.

How the input and output data is represented, or encoded, is a major component to successfully instructing a network. Artificial networks only deal with numeric input data. Therefore, the raw data must often be converted from the external environment. Additionally, it is usually necessary to scale the data, or normalize it to the network's paradigm.

3- This pre-processing of real-world

stimuli, be they cameras or sensors, into machine readable format is already common for standard computers. Many conditioning techniques which directly apply to artificial neural network implementations are readily available. It is then up to the network designer to find the best data format and matching network architecture for a given application.

After a supervised network performs well on the training data, then it is important to see what it can do with data it has not seen before. If a system does not give reasonable outputs for this test set, the training period is not over. Indeed, this testing is critical to insure that the network has not simply memorized a given set of data but has learned the general patterns involved within an application.

Unsupervised learning is the great promise of the future. It shouts that computers could someday learn on their own in a true robotic sense. Currently, this learning method is limited to networks known as selforganizing maps. These kinds of networks are not in widespread use. They are basically an academic novelty.

Yet, they have shown they can provide a solution in a few instances, proving that their promise is not groundless. They have been proven to be more effective than many algorithmic techniques for numerical aerodynamic flow calculations. They are also being used in the lab where they are split into a front-end network that recognizes short, phoneme-like fragments of speech which are then passed on to a backend network. The second artificial network recognizes these strings of fragments as words.

5- This promising field of unsupervised

learning is sometimes called selfsupervised learning. These networks use no external influences to adjust their weights. Instead, they internally monitor their performance. These networks look for regularities or trends in the input signals, and makes adaptations according to the function of the network.

Even without being told whether it's right or wrong, the network still must have some information about how to organize itself. This information is built into the network topology and learning rules. An unsupervised learning algorithm might emphasize cooperation among clusters of processing elements. In such a scheme, the clusters would work together.

6- If some external input activated

any node in the cluster, the cluster's activity as a whole could be increased. Likewise, if external input to nodes in the cluster was decreased, that could have an inhibitory effect on the entire cluster. Competition between processing elements could also form a basis for learning. Training of competitive clusters could amplify the responses of specific groups to specific stimuli.

As such, it would associate those groups with each other and with a specific appropriate response. Normally, when competition for learning is in effect, only the weights belonging to the winning processing element will be updated. At the present state of the art, unsupervised learning is not well understood and is still the subject of research. This research is currently of interest to the government because military situations often do not have a data set available to train a network until a conflict arises.

The rate at which ANNs learn depends upon several controllable factors. In selecting the approach there are many trade-offs to consider. Obviously, a slower rate means a lot more time is spent in accomplishing the off-line learning to produce an adequately trained system.

With the faster learning rates, however, the network may not be able to make the fine discriminations possible with a system that learns more slowly. Researchers are working on producing the best of both worlds. Generally, several factors besides time have to be considered when discussing the off-line training task, which is often described as "tiresome."

size, paradigm selection, architecture, type of learning rule or rules employed, and desired accuracy must all be considered. These factors play a significant role in determining how long it will take to train a network. Changing any one of these factors may either extend the training time to an unreasonable length or even result in an unacceptable accuracy.

Most learning functions have some provision for a learning rate, or learning constant. Usually this term is positive and between zero and one. If the learning rate is greater than one, it is easy for the learning algorithm to overshoot in correcting the weights, and the network will oscillate. Small values of the learning rate will not correct the current error as quickly, but if small steps are taken in correcting errors, there is a good chance of arriving at the best minimum convergence.

Many learning laws are in common use. Most of these laws are some sort of variation of the best known and oldest learning law, Hebb's Rule. Research into different learning functions continues as new ideas routinely show up in trade publications. Some researchers have the modeling of biological learning as their main objective.

Others are experimenting with adaptations of their perceptions of how nature handles learning. Either way, man's understanding of how neural processing actually works is very limited. Learning is certainly more complex than the simplifications represented by the learning laws currently developed. A few of the major laws are presented as examples.

The first, and undoubtedly the best known, learning rule was introduced by Donald Hebb. The description appeared in his book The Organization of Behavior in 1949. His basic rule is: If a neuron receives an input from another neuron, and if both are highly active (mathematically have the same sign), the weight between the neurons should be strengthened.

This rule is a further variation of Hebb's Rule. It is one of the most commonly used. This rule is based on the simple idea of continuously modifying the strengths of the input connections to reduce the difference (the delta) between the desired output value and the actual output of a processing element.

This rule changes the synaptic weights in the way that minimizes the mean squared error of the network. This rule is also referred to as the Widrow-Hoff Learning Rule and the Least Mean Square (LMS) Learning Rule. The way that the

Delta Rule works is that the delta error in the output layer is transformed by the derivative of the transfer function and is then used in the previous neural layer to adjust input connection weights. In other words, this error is back-propagated into previous layers one layer at a time. The process of back-propagating the network errors continues until the

first layer is reached. The network type called Feedforward, Back-propagation derives its name from this method of computing the error term. When using the delta rule, it is important to ensure that the input data set is well randomized. Well ordered or structured presentation of the training set can lead to a network which can not converge to the desired accuracy. If that happens, then the network is incapable of learning the problem.