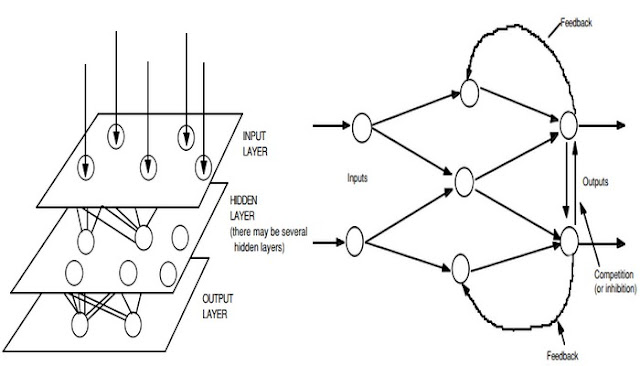 Basically, all artificial neural networks have a similar structure or topology as shown in Figure 2.4.1. In that structure some of the neurons interfaces to the real world to receive its inputs. Other neurons provide the real world with the network's outputs.

This output might be the particular character that the network thinks that it has scanned or the particular image it thinks is being viewed. All the rest of the neurons are hidden from view. But a neural network is more than a bunch of neurons. Some early researchers tried to simply connect neurons in a random manner, without much success.

Now, it is known that even the brains of snails are structured devices. One of the easiest ways to design a structure is to create layers of elements. It is the grouping of these neurons into layers, the connections between these layers, and the summation and transfer functions that comprises a functioning neural network. The general terms used to describe these characteristics are common to all networks.

Although there are useful networks which contain only one layer, or even one element, most applications require networks that contain at least the three normal types of layers - input, hidden, and output.

The layer of input neurons receive the data either from input files or directly from electronic sensors in real-time applications. The output layer sends information directly to the outside world, to a secondary computer process, or to other devices such as a mechanical control system. Between these two layers can be many hidden layers. These internal layers contain many of the

The inputs and outputs of each of these hidden neurons simply go to other neurons. In most networks each neuron in a hidden layer receives the signals from all of the neurons in a layer above it, typically an input layer.

After a neuron performs its function it passes its output to all of the neurons in the layer below it, providing a feedforward path to the output. (Note: in section 5 the drawings are reversed, inputs come into the bottom and outputs come out the top.)

These lines of communication from one neuron to another are important aspects of neural networks. They are the glue to the system. They are the connections which provide a variable strength to an input. There are two types of these connections.

One causes the summing mechanism of the next neuron to add while the other causes it to subtract. In more human terms one excites while the other inhibits. Some networks want a neuron to inhibit the other neurons in the same layer.

This concept is also called competition. Another type of connection is feedback. This is where the output of one layer routes back to a previous layer. An example of this is shown i n Figure 2.4.2.

Simple Network with Feedback and Competition.2-

The way that the neurons are connected to each other has a significant impact on the operation of the network. In the larger, more professional software development packages the user is allowed to add, delete, and control these connections at will. By "tweaking" parameters these connections can be made to either excite or inhibit.

Once a network has been structured for a particular application, that network is ready to be trained. To start this process the initial weights are chosen randomly. Then, the training, or learning, begins. There are two approaches to training - supervised and unsupervised.

Unsupervised training is used to perform some initial characterization on inputs. However, in the full blown sense of being truly self learning, it is still just a shining promise that is not fully understood, does not completely work, and thus is relegated to the lab.

In supervised training, both the inputs and the outputs are provided. The network then processes the inputs and compares its resulting outputs against the desired outputs. Errors are then propagated back through the system, causing the system to adjust the weights which control the network.

The current commercial network development packages provide tools to monitor how well an artificial neural network is converging on the ability to predict the right answer. These tools allow the training process to go on for days, stopping only when the system reaches some statistically desired point, or accuracy. However, some networks never learn.

This could be because the input data does not contain the specific information from which the desired output is derived. Networks also don't converge if there is not enough data to enable complete learning. Ideally, there should be enough data so that part of the data can be held back as a test. Many layered networks with multiple nodes are capable of memorizing data. To monitor the network to determine if the system is simply memorizing its data in some nonsignificant way,

supervised training needs to hold back a set of data to be used to test the system after it has undergone its training. (Note: memorization is avoided by not having too many processing elements.) If a network simply can't solve the problem, the designer then has to review the input and outputs, the number of layers, the number of elements per layer, the connections between the layers, the summation, transfer, and training functions, and even the initial weights themselves.

Those changes required to create a successful network constitute a process wherein the "art" of neural networking occurs. Another part of the designer's creativity governs the rules of training. There are many laws (algorithms) used to implement the adaptive feedback required to adjust the weights during training.

The most common technique is backward-error propagation, more commonly known as back-propagation. These various learning techniques are explored in greater depth later in this report. Yet, training is not just a technique. It involves a "feel," and conscious analysis, to insure that the network is not overtrained.

Initially, an artificial neural network configures itself with the general statistical trends of the data. Later, it continues to "learn" about other aspects of the data which may be spurious from a general viewpoint. When finally the system has been correctly trained, and no further learning is needed, the weights can, if desired, be "frozen."

In some systems this finalized network is then turned into hardware so that it can be fast. Other systems don't lock themselves in but continue to learn while i n production use.

This is often referred to as self-organization or adaption. At the present time, unsupervised learning is not well understood. This adaption to the environment is the promise which would enable science fiction types of robots to continually learn on their own as they encounter new situations and new environments.

Life is filled with situations where exact training sets do not exist. Some of these situations involve military action where new combat techniques and new weapons might be encountered. Because of this unexpected aspect to life and the human desire to be prepared, there continues to be research into, and hope for, this field.

He has developed a self-organizing network, sometimes called an autoassociator, that learns without the benefit of knowing the right answer. It is an unusual looking network in that it contains one single layer with many connections. The weights for those connections have to be initialized and the inputs have to be normalized.

The neurons are set up to compete in a winner-take-all fashion. Kohonen continues his research into networks that are structured differently than standard, feedforward, back-propagation approaches. Kohonen's work deals with the grouping of neurons into fields.

Neurons within a field are "topologically ordered." Topology is a branch of mathematics that studies how to map from one space to another without changing the geometric configuration. The three-dimensional groupings often found in mammalian brains are an example of topological ordering.

Kohonen has pointed out that the lack of topology in neural network models make today's neura networks just simple abstractions of the real neural networks within the brain. As this research continues, more powerful self learning networks may become possible. But currently, this field remains one that is still in the laboratory.

6- How Neural Networks Differ from Traditional Computing and Expert Systems

keeping ledgers, and keeping tabs of inventory are well defined and do not require the special characteristics of neural networks. Table 2.6.1 identifies the basic differences between the two computing approaches. Traditional computers are ideal for many applications. They can process data, track inventories, network results, and protect equipment.

These applications do not need the special characteristics of neural networks. Expert systems are an extension of traditional computing and are sometimes called the fifth generation of computing. (First generation computing used switches and wires.

The second generation occurred because of the development of the transistor. The third generation involved solidstate technology, the use of integrated circuits, and higher level languages like

This expert does not have to understand traditional programming. That person simply has to understand both what he wants a computer to do and how the mechanism of the expert system shell works. It is this shell, part of the inference engine, that actually tells the computer how to implement the expert's desires.

This implementation occurs by the expert system generating the computer's programming itself, it does that through "programming" of its own. This programming is needed to establish the rules for a particular application. This method of establishing rules is also complex and does require a detail oriented person.