Major Components of an Artificial Neuron

Major Components of an Artificial Neuron 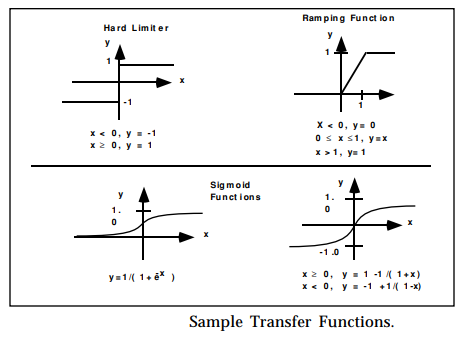 This figure is adapted from NeuralWare's simulation model used i n NeuralWorks Profession II/Plus. NeuralWare sells a artificial neural network design and development software package. Their processing element model shows that networks designed for prediction can be very similar to networks designed for classification or any other network category.

Prediction, classification and other network categories will be discussed later. The point here is that all artificial neural processing elements have common components.This section describes the seven major components which make up an artificial neuron. These components are valid whether the neuron is used for input, output, or is in one of the hidden layers.

A neuron usually receives many simultaneous inputs. Each input has its own relative weight which gives the input the impact that it needs on the processing element's summation function. These weights perform the same type of function as do the the varying synaptic strengths of biological neurons. In both cases, some inputs are made more important than others so that they have a greater effect on the processing element as they combine to produce a neural response.

Weights are adaptive coefficients within the network that determine the intensity of the input signal as registered by the artificial neuron. They are a measure of an input's connection strength. These strengths can be modified in response to various training sets and according to a network’s specific topology or through its learning rules.

The first step in a processing element's operation is to compute the weighted sum of all of the inputs. Mathematically, the inputs and the corresponding weights are vectors which can be represented as (i1, i2 . . . in) and (w1, w2 . . . wn). The total input signal is the dot, or inner, product of these two vectors.

This simplistic summation function is found by muliplying each component of the i vector by the corresponding component of the w vector and then adding up all the products. Input1 = i1 * w1, input2 = i2 * w2, etc., are added as input1 + input2 + . . . + inputn. The result is a single number, not a multi-element vector.

The summation function can be more complex than just the simple input and weight sum of products. The input and weighting coefficients can be combined in many different ways before passing on to the transfer

function. In addition to a simple product summing, the summation function can select the minimum, maximum, majority, product, or several normalizing algorithms. The specific algorithm for combining neural inputs is determined by the chosen network architecture and paradigm. Some summation functions have an additional process applied to the result before it is passed on to the transfer function.

Most of the current network implementations use an "identity" activation function, which is equivalent to not having one. Additionally, such a function is likely to be a component of the network as a whole rather than of each individual processing element component.

The result of the summation function, almost always the weighted sum, is transformed to a working output through an algorithmic process known as the transfer function. In the transfer function the summation total can be compared with some threshold to determine the neural output. If the sum is greater than the threshold value, the processing element generates a signal.

If the sum of the input and weight products is less than the threshold, no signal (or some inhibitory signal) is generated. Both types of response are significant. The threshold, or transfer function, is generally non-linear. Linear (straight-line) functions are limited because the output is simply proportional to the input. Linear functions are not very useful.

Another type of transfer function, the threshold or ramping function, could mirror the input within a given range and still act as a hard limiter outside that range. It is a linear function that has been clipped to minimum and maximum values, making it non-linear.

Mathematically, the exciting feature of these curves is that both the function and its derivatives are continuous. This option works fairly well and is often the transfer function of choice. Other transfer functions are dedicated to specific network architectures and will be discus

sed later. Prior to applying the transfer function, uniformly distributed random noise may be added. The source and amount of this noise is determined by the learning mode of a given network paradigm. This noise is normally referred to as "temperature" of the artificial neurons.

The name, temperature, is derived from the physical phenomenon that as people become too hot or cold their ability to think is affected. Electronically, this process is simulated by adding noise. Indeed, by adding different levels of noise to the summation result, more brain-like transfer functions are realized.

To more closely mimic nature's characteristics, some experimenters are using a gaussian noise source. Gaussian noise is similar to uniformly distributed noise except that the distribution of random numbers within the temperature range is along a bell curve. The use of temperature is an ongoing research area and is not being applied to many engineering applications.

In contrast, the global temperature coefficient allows the transfer function to have a learning variable much like the synaptic input weights. This concept is claimed to create a network which has a significantly faster (by several order of magnitudes) learning rate and provides more accurate results than other feedforward, back-propagation networks.

After the processing element's transfer function, the result can pass through additional processes which scale and limit. This scaling simply multiplies a scale factor times the transfer value, and then adds an offset.

Limiting is the mechanism which insures that the scaled result does not exceed an upper or lower bound. This limiting is in addition to the hard limits that the original transfer function may have performed. This type of scaling and limiting is mainly used in topologies to test biological neuron models, such as James Anderson's brain-state-in-the-box.

Each processing element is allowed one output signal which it may output to hundreds of other neurons. This is just like the biological neuron, where there are many inputs and only one output action. Normally, the output is directly equivalent to the transfer function's result.

Competition can occur at one or both of two levels. First, competition determines which artificial neuron will be active, or provides an output. Second, competitive inputs help determine which processing element will participate in the learning or adaptation process.

In most learning networks the difference between the current output and the desired output is calculated. This raw error is then transformed by the error function to match a particular network architecture. The most basic architectures use this error directly, but some square the error while retaining its sign, some cube the error, other paradigms modify the raw error to fit their specific purposes.

error scaled in some manner (often by the derivative of the transfer function), or some other desired output depending on the network type. Normally, this back-propagated value, after being scaled by the learning function, is multiplied against each of the incoming connection weights to modify them before the next learning cycle.