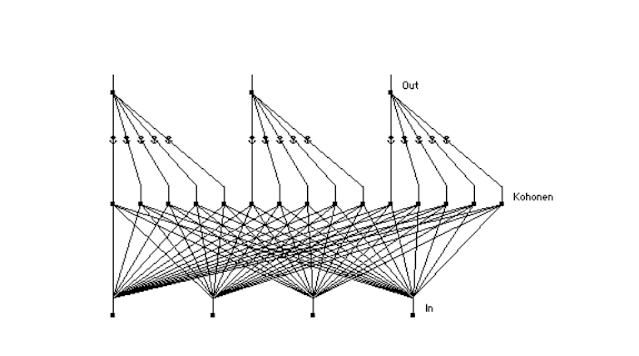 The previous section describes networks that attempt to make projections of the future. But understanding trends and what impacts those trends might have is only one of several types of applications. The second class of applications is classification.

A network that can classify could be used in the medical industry to process both lab results and doctor-recorded patience symptoms to determine the most likely disease. Other applications can separate the "tire kicker" inquiries from the requests for information from real buyers.

Specifically, Learning Vector Quantization is a artificial neural network model used both for classification and image segmentation problems. Topologically, the network contains an input layer, a single Kohonen layer and an output layer.

3- An example network is shown in Figure .

It is the Kohonen layer that learns and performs relational classifications with the aid of a training set. This network uses supervised learning rules. However, these rules vary significantly from the back-propagation rules. To optimize the learning and recall functions, the input layer should contain only one processing element for each separable input parameter.

Higher-order input structures could also be used. Learning Vector Quantization classifies its input data into groupings that it determines. Essentially, it maps an n-dimensional space into an mdimensional space. That is it takes n inputs and produces m outputs. The networks can be trained to classify inputs while preserving the inherent topology of the training set.

5- During the recall mode, the distance

of an input vector to each processing element is computed and again the nearest element is declared the winner. That in turn generates one output, signifying a particular class found by the network. There are some shortcomings with the Learning Vector Quantization architecture.

Obviously, for complex classification problems with similar objects or input vectors, the network requires a large Kohonen layer with many processing elements per class. This can be overcome with selectively better choices for, or higher-order representation of, the input parameters.

6- The learning mechanisms has some weaknesses

which have been addressed by variants to the paradigm. Normally these variants are applied at different phases of the learning process. They imbue a conscience mechanism, a boundary adjustment algorithm, and an attraction function at different points while training the network.

The simple form of the Learning Vector Quantization network suffers from the defect that some processing elements tend to win too often while others, in effect, do nothing. This particularly happens when the processing elements begin far from the training vectors. Here, some elements are drawn in close very quickly and the others remain permanently far away.

7- To alleviate this problem, a conscience mechanism

As the network progresses along its learning curve, this bias proportionality factors needs to be decreased. The boundary adjustment algorithm is used to refine a solution once a relatively good solution has been found. This algorithm effects the cases when the winning processing element is in the wrong class and the second best processing element is in the right class.

8- A further limitation is that the training vector

must be near the midpoint of space joining these two processing elements. The winning wrong processing element is moved away from the training vector and the second place element is moved toward the training vector. This procedure refines the boundary between regions where poor classifications commonly occur. In the early training of the Learning Vector Quantization network, it is some times desirable to turn off the repulsion.

Robert Hecht-Nielsen developed the counter-propagation network as a means to combine an unsupervised Kohonen layer with a teachable output layer. This is yet another topology to synthesize complex classification problems, while trying to minimize the number of processing elements and training time.

The operation for the counter-propagation network is similar to that of the Learning Vector Quantization network in that the middle Kohonen layer acts as an adaptive look-up table, finding the closest fit to an input stimulus and outputting its equivalent mapping.