The effect of technology-assisted engagement on second language vocabulary strategy

The effect of technology-assisted engagement on second language vocabulary strategy 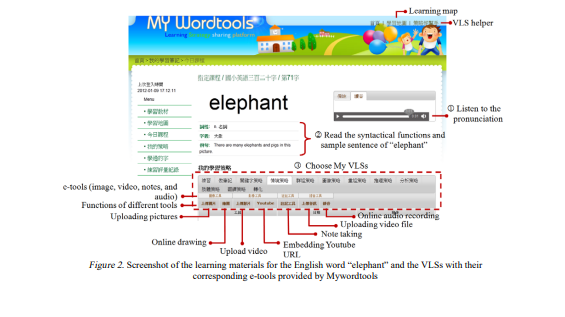 Vocabulary acquisition is important for second or foreign language (L2) learners (Laufer, 1986; Llach & Gómez, 2007; Nation, 1990; Tavìl & Ìşìsağ, 2009) since it affects their grammar competence, ability to communicate, and perceptions about the relative importance of vocabulary (Barcroft, 2004). Furthermore,

Lawson & Hogben, 1996). According to Dansereau (1985) and Rigney (1978), learning strategies are actions performed by learners to aid the acquisition, storage, subsequent retrieval, and use of information. Strategies are especially important for L2 learning because they are tools for active and self-directed involvement, which is in line with the argument of constructionist learning in which learners construct mental models to understand the L2 knowledge.

Strategies play an important role in learning a second or foreign language (L2). The aim of the current study was to develop and evaluate a co-sharing-based strategy learning system for L2 vocabulary learning known as “Mywordtools.

” Mywordtools is designed specifically for lexical learning, enabling learners to use the currently available vocabulary learning strategies (VLSs) as well as e-tools provided within this system to learn L2 vocabulary for both indoor and outdoor settings during learners' free time. The effects of Mywordtools on L2 learners’ word learning were evaluated over a 5-week period.

Sixty-one sixth-grade learners of English as a foreign language (EFL) participated in this study. The results of this study demonstrate that students using Mywordtools to practice and share VLSs outperformed both those who did not use Mywordtools and those who used the platform but without sharing. It was also found that strategy sharing helped

, and they consequently performed significantly better than those who did not implement strategy sharing. The overall results indicate that the use of co-sharing with Mywordtools not only benefits the development of VLSs by EFL students but also helps them to gain more in L2 vocabulary learning

Society seeks academic articles on the issues affecting the developers of educational systems and educators who implement and manage such systems. The articles should discuss the perspectives of both communities and their relation to each other:

• Educators aim to use technology to enhance individual learning as well as to achieve widespread education and expect the technology to blend with their individual approach to instruction. However, most educators are not fully aware of the benefits that may be obtained by proactively harnessing the available technologies and how they might be able to influence further developments through systematic feedback and suggestions.

and artificial intelligence (AI) researchers are sometimes unaware of the needs and requirements of typical teachers, with a possible exception of those in the computer science domain. In transferring the notion of a 'user' from the human-computer interaction studies and assigning it to the 'student', the educator's role as the 'implementer/ manager/ user' of the technology has been forgotten.

2- The aim of the journal is to help them better

understand each other's role in the overall process of education and how they may support each other. The articles should be original, unpublished, and not in consideration for publication elsewhere at the time of submission to Educational Technology & Society and three months thereafter.