What is a literature review? 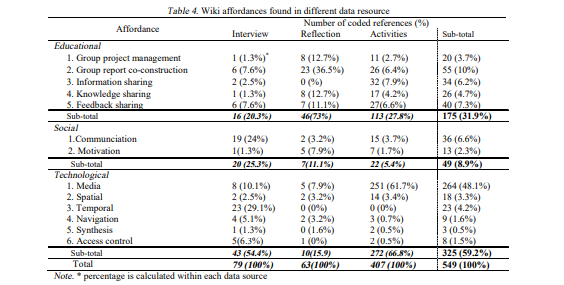 Literature review
Originally coined by Gibson (1977), the term “affordance” refers to a relation naturally existing between the attributes of an object and the characteristics of the user. It provides a direct approach to perceiving the value and meaning of objects or environments that afford users to perform particular actions.
Norman defines this term as “the perceived and actual properties of the thing, primarily those fundamental properties that determine just how the thing could possibly be used” (1988, p. 9). The difference between the two definitions is that Gibson’s definition refers to utility, while Norman’s refers to usability (Bower, 2008).
1-  As distinguished by Nielsen (1994),
utility represents the functionality that a system provides a user, while usability concerns how well the user can actually use the functionality in order to achieving a task. Therefore, Gibson’s perspective focuses upon the fundamental characteristics of the object in relation to the user, which is more suitable in discriminating how technologies can be applied to design learning tasks.
Norman places more emphasis on how an object is perceived, which is a better way to evaluate learning technologies. The concept of “affordance” is adopted in the field of CSCL as a framework for the purpose of designing and evaluating
CSCL environments that involve the unanticipated interactions between members during collaborative learning, such that affordances are classified as educational, technological and social affordances (Kirschner et al., 2004). Educational affordance refers to characteristics of the learning environment that facilitate collaborative learning behavior;
2- Social affordance to characteristics that offer
Social-contextual facilitation in relation to students’ social interaction; and technological affordance to characteristics that enable learners to accomplish learning tasks in an efficient and effective way. This classification is developed from the understanding that CSCL represents a learning situation “where the education context is collaborative, the social context is the group, and the technological context is the computer-mediated setting” (Kirschner et al., 2004, p. 50).
When evacuating technology as a CSCL environment, we should analyze the combination of educational, social, and technological affordances for collaborative learning. In describing a methodology to support technology selection for the learning process, Bower (2008) puts forward a functional category of technological affordances.
3- However, a classification of educational
And social affordance has not been identified in previous studies. Studies must attempt to extend our understanding of affordances as they emerge from classroom practitioners’ efforts to utilize this technology with a combination of these three elements.
To obtain a comprehensive characterization of the interactions between an object and its user, we need to explore the related concept of constraint, which refers to a boundary, guide, or structure for action (Kennewell, Tanner, Jones, & Beauchamp, 2008).
4- A constraint is not a physical characteristic,
but a perception of a potential for action that is dependent on a user’s knowledge, skills and disposition. Constraint may sometimes be perceived as an obstacle to action. It has been defined as the incapacity, or diminished capacity, to utilize a tool at will (Murphy & Coffin, 2003).
A delicate balance between affordances and constraints exists in any form of communication that is mediated by computer (Sherry, 2000). It has been suggested that an improved understanding of the affordances and constraints resulting from a user’s interactions with learning environments is beneficial to teaching and learning (Swan, 2003).
5- Besides understanding the affordances
And constraints of the wiki, it is also important to investigate primary students’ attitudes of using the wiki for educational purposes. As applied to wikis, pedagogical value has been defined as the capacity of students to take part in learning through active participation in group interactions based on constructivist learning principles (Hazari & North, 2009).
This evaluation approach generates learners’ feedback that is specifically relevant to a technology efficacy in facilitating collaborative learning
6- MacGregor, 1992). As such, peer interactions
That ensue from a collaborative approach represent an important component of the learning experience (Pascarella & Terenzini, 2005). Since collaborative learning lays great stress on the extent of the exchanges that occur among students in a given environment (Dillenbourg & Schneider, 1995;
Golub, 1998), the discussion that occurs during task engagement is an important consideration in a CSCL environment. It has been theoretically suggested, on the basis of their functionalities, that wikis can be used to promote collaborative learning (Augar, Raitman, & Zhou, 2004; Felder & Brent, 2003; Hsu, 2007).
7- Findings and discussion Affordances
A total of 549 references to affordances were found: 79 from students’ responses to open-ended questions in interviews, 63 from students’ reflections on the wiki pages, and 407 from the wiki recorded students’ activities on the wiki platform.
The number of coded references and their percentage distribution in all three major categories are summarized in Table 4. A synthesis of the findings from the different data sources showed that technological affordances were most apparent, followed by educational affordances and social affordances.
8- First of all, for students’ responses in group interviews,
the most prominently reported affordances were related to technological aspects. Specifically, temporal affordance was mostly reported. With respect to educational affordances, the analysis revealed that the wiki allowed group report co-construction with simultaneous contributions for collaborative work and provided a platform to share information, knowledge and comments.
The wiki was also found to provide a social affordance by serving as a platform for communication and motivation. Secondly, in terms of students’ reflections posted on the wiki pages, educational affordances were found to be the most prominent (73%). The top education affordance was that the wiki provided students with a platform to co-construct their group reports (36.5%).
9- There were a small percentage of technological affordances.
References coded to social affordances were distributed between communication and motivation. Lastly, most of the references from students’ activities were centered on the technological aspects, and more than half of the coded references were media affordances.
The usefulness of a CSCL environment consists of its usability and utility, is determined by the various types of affordances (Kirschner et al., 2004). Usability, which is the extent to which the CSCL environment is used by students in supporting their collaborative group work, is determined by technological affordances (Vatrapu, Suthers, & Medina, 2008).

Our findings provided evidence that supported the usability of wikis as a CSCL environment. The observation of students’ online activities highlighted the technological affordances. Consistently, throughout all sources of data, media affordance was found to be the most prevalent.
This is not surprising since the primary function offered by wikis is the ability to combine reading and writing within a web browser, and the wiki allows several users to create and link web pages simultaneously (Lamb, 2004). Temporal affordance was reported most during the interviews. For example, one student (I-SH-5B-F) reported, “We can share with each other at anytime and
Internet