What is the conceptual framework

What is the conceptual framework 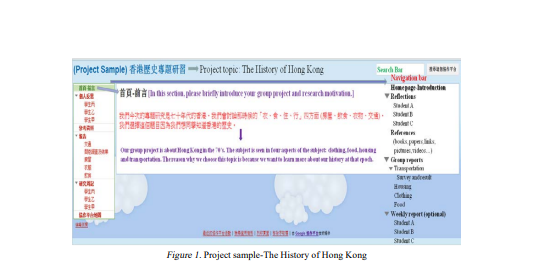 Theoretically, the use of wikis in CSCL is mostly grounded in constructivism (Larusson & Alterman, 2009; Parker & Chao, 2007). Constructivism is a theory of learning which asserts that learners can actively learn and construct rather than passively receive

And store knowledge through their own inferences and discoveries based on their prior knowledge (Piaget, 1976; Vygotsky, 1978). Vygotsky states that learning is fundamentally social in nature, emphasizing the important role of social interaction and activity

of knowledge and understanding (Cole & Wertsch, 1996). Based on social constructivist principles, collaborative interactions among students have been shown to enhance learning through exposure to alternative perspectives (Brett & Nagra,

This study employed a mixed methods research design, using quantitative and qualitative data sources, to examine the usefulness of a wiki for P5 students’ GS group projects. Participants The participants were 388 P5 students with an average age of ten years from four local primary schools. Procedures In a naturalistic setting, the

P5 students were tasked to conduct group research projects during the 11-week period of the course (Seen in table 1). Students in groups of 5-6 worked on a GS project and each group chose a project topic under four themes proposed by the Curriculum Development Council (2011): (1) Life: Change, Change, Change, (2) Life in the city, (3)

3- To know about my country, and

(4) Beyond our earth. Google Sites was chosen as the wiki platform in this study because it does not require much setup, maintenance or technical knowledge, which makes it suitable for novice users (Herrick & Collins, 2009). In addition, Google Sites supports Chinese (Traditional) which is the mother language for the students.

This study adopted a collaborative teaching model that involved two kinds of subject teachers and the school librarian working together to implement the teaching objective. Such a teaching approach has been found to be beneficial in scaffolding students more effectively during the process of project completion (Chu, 2009). The roles of the different kinds of teachers are described as follows.

˙ The GS teachers focused on the subject aspect and research process of the projects - whether students were asking appropriate questions for the projects, classifying information found sensibly, and selecting suitable materials to be included in their project presentation.

The GS teachers monitored students’ work and commented on the wiki pages. ˙ The IT teachers were responsible for training students in the IT skills, focusing on the use of Google Sites. A project sample was provided on the first wiki page by the IT teachers (see Figure 1), and the groups were then free to start their pages to conduct their group work.

˙ The teacher librarian conducted activities to help equip students well with the information literacy skills that they would need to search, locate, and use relevant information sources for their projects.

Qualitative and quantitative data were collected alongside the implementation of the students’ group projects in the GS course. Qualitative data sources included

(3) students’ activities on the wiki platform (12 groups as above). Focus group interviews were conducted at the end of the projects, in which open-ended questions probed students on their experiences in using Google Sites for project con-construction.

5- Students were asked to write reflections

about their experiences with the wiki pages, either individually or in groups. The wiki can record every revision, so we tracked students’ contributions to the wiki pages (e.g., co-construction of reports and online communications). The quantitative data source was a questionnaire-format instrument investigating students’ perceptions of the pedagogical value of the wiki.

For the qualitative data sources, one unit of analysis was defined as a transcription that corresponded to an action taken or a comment made by a student on a wiki page or recorded wiki revisions. Responses to open-ended questions in the group interviews were also transcribed and analyzed to reveal themes that appeared to illustrate affordance and constraints.

6- The qualitative data sources were uploaded as text files into

7- However, with regard to educational and

ocial affordances, second level categories have not been identified in previous studies. As such, these emerged from the current data naturally through an interactive process of coding based on the definitions of affordances, identifying themes at the second level, and clarifying the definitions. Such an approach is a commonly employed strategy in cognitive studies (Chu, Chan, & Tiwari, 2001;

Lee, Chan, & van Aalst, 2006). Preliminary coding was done by the authors in order to refine the second level of categories. Various iterations were discussed to clarify the definitions of categories. For inter-rater reliability, the first and third author independently coded 30% of data covering three sources in the first round, which resulted in 75% inter-rater agreement.

After further discussion, all data were independently coded in the second round, which yielded 95% inter-rater agreement. In this study, five categories of educational affordances, and two categories of social affordances were found (See Table 2).