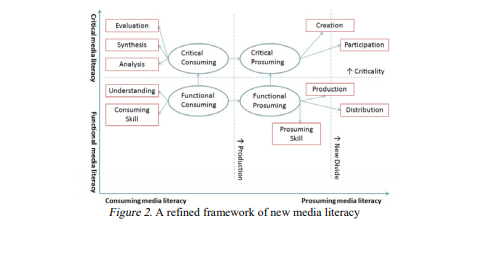 The beginning of media literacy can be traced back to the first half of the 20th century when Leavis & Thompson (1933) proposed to teach students how to distinguish the high culture and the popular culture through education in the UK.

1- In this early protectionist approach,

These advocates aim at promoting high culture to fight against the increasing growth of popular culture in printing media era (Buckingham, 2003). In 1950s, media literacy was introduced to the United States with the acknowledgement of the increasing impact of mass media such as radio and television on people’s daily life and schooling (Schwarz, 2005).

2- The appearance of new media also raised concerns among

The public in various countries. For example, the recently growing interests in media literacy in various East Asian countries such as China (including Hong Kong), Taiwan, Japan and Korea since late 1990s (Cheung, 2009) comes from an emerging new media technology, the internet, that causes cyber cafe phenomenon.

The birth of internet is a milestone in the development of media literacy because it ‘changed the whole media landscape’ and starts a debate on the different approaches to media literacy (Gauntlett, 2011). This is also the starting point for us to propose a framework that can both suit the need of conventional media such as television, newspaper and radio and new media such as internet and the Web 2.0 technology.

3-With the emerging new media technologies in the beginning of

21st century, traditional literacy is no longer sufficient for an individual to competently survive in this new media ecology. Wu and Chen (2007) argued that media is not merely shaping our culture; it is our culture.

In other words, new media plays an indispensable role in human societies and individuals need to equip with new literacies (e.g., Cope & Kalantzis, 2000) to be able to fully engage in the new media environment. All the above arguments represent the necessity and importance of new media literacy.

4- As aforementioned, there are similarities between media

Literacy and new media literacy regarding the approaches to understand media, the role of media in a society and the purposes of media literacy. Cappello, Felini & Hobbs (2011) indicated that the current media literacy education strikes a balance between discrimination/protection and empowerment approaches and the recognition of media as an aspect of social environment is a pushing force for the recent development of media literacy in the world.

The moving away from extreme protectionist approach and acknowledging the great socio-cultural impact of media have also offered a solid foundation for the development of new media literacy. Detail discussion on various approaches of media literacy education can be referred to Buckingham (2003), Leaning (2009) and Lin (2010).

Cappello, et al. (2011) applied the concept ‘expanded literacy’ (p. 68) to underline the shift from the literacy strictly related to alphabetic and written texts to another literacy focused more on social communication and ideology. Besides, Chen et al. (2011) argued that an individual needs to become new media ‘literate’ in order to participate responsibly in the new century society

It seems necessary to explore the content and theoretical framework of ‘new media literacy (NML)’. However, there are very few applicable frameworks that provide a comprehensive understanding about how NML can and should be like.

There is only one paper documenting the attempt to develop a framework to unpack NML (Chen et al., 2011) with a focus on technical and socio-cultural characteristics of new media. In next section, we discuss this framework and indicate some limitations.

Then, we argue for a need to further elaborate and refine the framework to make it work better in explaining the socio-cultural consequence and the daily practices of new media.

As Chen et al. (2011) pointed out, most researchers perceived NML ‘as a combination of information skills, conventional literacy skills, and social skills’ (p. 84) or multiliteracies. That is, relevant definitions generally overlooked the significance of both the technical and socio-cultural characteristics of new media in shaping what NML can and should be.

To address this gap, Chen et al. (2011) proposed a promising framework that unpacks NML as two continua from consuming to prosuming literacy and from functional to critical literacy (see Figure 1). Specifically, the ‘consuming’ literacy was defined as the ability to access media message and to utilize media at different levels, while ‘prosuming’ literacy ability to produce media contents (e.g. messages and artifacts).

The consuming aspect should be integrated and implied in the prosuming aspect. For instance, an individual have to read and understand others’ ideas before they create media contents to respond. On the other hand, the ‘functional’ literacy refers to individuals’ ‘textual meaning making and use of media tools and content’ (Chen et al., 2011, p. 86), while ‘critical’

Literacy their ability to analyze, evaluate, and critique media. Similarly, the functional aspect provides an essential basis for the critical aspect. For example, individuals may fail to make their great grasp of socio-cultural contexts of the media explicit due mostly to their unfamiliarity with the technical characteristics of new media tools/languages.

CP underlines individuals’ contextual interpretation of the media content during their participation activities. As Chen & Wu (2011) suggested, CP should be advocated as an important goal in the 21st century information society